Cells are the basic unit of life. All living organisms are made up of one or more cells. As will be discussed later, the human body is made up of millions of cells. In order to know the problems that occur in tumours, it is necessary to understand the regularity of normal cell activity. First, let’s discuss the composition and function of cells. biological composition 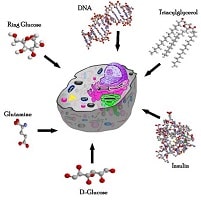 Let us first discuss the composition of the cells. All cells, regardless of function and location, share common attributes and processes. Surprisingly, almost all cells are composed of four basic molecules. Shown above is a cell around which these basic molecules are listed. biological composition 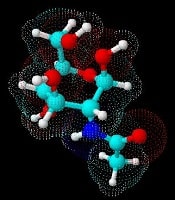 The first type of biomolecule we will discuss is the carbohydrates. Such molecules are composed of basic elements such as carbon (C), hydrogen (H), and oxygen (O). We usually call this type of molecule sugar. Carbohydrate molecules can be very small or very large. Like all other biomolecules, carbohydrate molecules are often strung together by smaller units to form long chains. Just like the beading on the wrist, it is made up of a string of beads that are very long. We refer to this structural unit (Imagery “beads”) is called a monomer (Monomer), the long chain monomer is called polymer (Polymer).

For example, the sugar (lactose) and sugar (sucrose) contained in milk are all carbohydrates. Shown below is the molecular structure of glucose. Glucose is a monomeric sugar that is the main source of energy for our body. biological composition

Carbohydrates have several functions in cells. It provides a good source of energy for many activities within the cell. Certain carbohydrates also have structural functions. For example, cellulose (Cellulose), which is a glucose polymer (Polymer), enables the plant grows to a certain height, and plant texture becomes solid. Some type of sugar polymer, is stored in the form of energy, such as starch (Starch) and glycogen (Glycogen). Starch is present in plants such as potatoes, while glycogen is present in animals. The figure below shows a short molecule of glycogen. You can adjust the cell model yourself to understand its structure. biological composition

Carbohydrates are essential for the exchange of information between cells. It also helps the body cells attach to each other and attach the cells to substances that surround the cells. The body is resistant to the invasion of microbes and can remove foreign matter (such as dust and pollen adhering to the nasal mucosa and pharyngeal mucosa) from the body. It is also dependent on certain properties of carbohydrates.

Like carbohydrates, proteins are also made up of smaller units. Such protein-constituting monomers are called amino acids. There are about twenty different amino acids. There is an amino acid called glutamine, and its structure is shown in the following figure: biological composition

In living organisms, proteins have the following functions:
Lipid

Lipids (Lipid) This term refers to a large class of biomolecules including fats, oils, wax, steroids (Steroid) hormone (hormones). Although they differ in structure, distribution, and function in and between cells, all lipids have the following common features and are therefore classified into one class.

The hydrophobic nature of lipids makes it multifunctional in biological systems. Fat is a good form of energy storage. Oils and waxes are used to form skin protective films to prevent infection. Certain lipids, such as steroid hormones, are important regulators of cellular activity. We will mention this again in the “information flow” section of the cell. Such as estrogen ( Estrogen such as steroid hormones), and cancer of the female reproductive system related. The treatment will be discussed in detail in the relevant chapters.

The figure shows the triglycerides ( triacylglycerol ) (fat) structure. The three long chains consist only of carbon and hydrogen, making this molecule hydrophobic. The “saturated fat” and “unsaturated fat” on the food label differ in the presence of a hydrocarbon group (carbon, hydrogen composition).

The main function of lipids is to form bio membranes. The cells are surrounded by a thin layer of lipid. The lipid layer is made of a special type of lipid, has both hydrophobic (Hydrophobic) have hydrophilic ( Hydrophilic ). The “hydrophilic end” of such molecules faces the inner environment filled with water and the multi-water environment outside the cell. Between these two layers is a hydrophobic region. Cell membranes are rich in proteins and other lipids such as cholesterol . 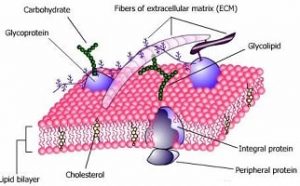 Most chemicals cannot pass through the lipid bilayer. Water and some small molecules can pass freely through the cell membrane, but other molecules must be actively transported by protein channels in the cell membrane. The cell membrane also contains a combination of biomolecules that have not yet been explained. The figure above shows that proteins can bind to carbohydrates to form glycoproteins. As mentioned before, glycoproteins are important for cell-to-cell communication. Changes in the amount and type of glycoproteins are common in cancer. Similarly, lipids can be combined with carbohydrates to form sugar esters.

All information for controlling and building cells is stored in nucleic acid molecules. biological composition

A nucleic acid ( Nucleic acid ) divided into two categories, i.e. deoxyribonucleic acid ( the DNA ) and ribonucleic acid ( an RNA ). Both types of molecules are polymers. Like the above-mentioned carbohydrates and proteins, they consist of subunits such as monomers. The monomers that make up the nucleic acid are called nucleotides. All kinds of nucleotides are often represented by acronyms, namely A, C, G, T, U. As with all of the mall thescribed above, the monomers constituting the DNA are similar but not identical to each other. One of the differences between DNA and RNA is that the nucleotides used to construct the polymer differ. DNA contains A, C, G, and T, while RNA contains A, C, G, and U.

DNA is composed of two nucleotide long chains (multimers) that are twisted to each other to form a double helix as shown in the following figure. These distorted molecules are specifically arranged and the specific nucleotides are always matched in pairs. For example, a nucleotide containing adenylate (A) is always paired with a nucleotide containing thymine (T); likewise, guanine (G) is always paired with cytosine (C). If you look closely at the image below, you will find that the paired nucleotides are arranged in the middle of the double helix. The polymer chains that form DNA can be very long, and each DNA molecule can contain millions of nucleotides. The figure below shows a portion of the short chain in the DNA of the double-stranded structure. 1

DNA present in the nucleus ( Nucleus ), the nucleus will be detailed in the next chapter. Regardless of its function, all nucleated cells in the human body contain the same DNA. The difference is “what part” in DNA is being used for a certain cell. For example, the cells that make up the liver contain the same DNA as the cells that make up the muscle; the activities of these two types of cells vary significantly depending on which parts of the DNA in the cell are being activated. DNA is a form of storage of genetic information and can be said to be a blueprint for the design of cells. Alterations in DNA sequences can result in changes in cellular behavior. Therefore, the unrestricted proliferation of cancer cells and many other changes are ultimately caused by mutations, ie, mutations in the DNA structure. biological composition

RNA is similar to DNA in many ways. It is also a multimer of nucleotides that carries genetic information. In addition to the difference in chemical structure between RNA and DNA, they also have the following important functional differences.

For cells, the information stored in DNA is like the design blueprint used by architects. The specific replication of RNA allows cells to use only the pages needed on the “blueprint” at a time. Copying the right RNA at the right time is very important for the cell. In cancer, the replication and regulation of RNA is abnormal. Just as the “reading the picture” error causes problems in the built house, RNA replication errors can lead to changes in the way cells behave, leading to the emergence of cancer. This important topic will be further elaborated in the “Gene Function” section. First, we will discuss more complex forms of biomolecules and then introduce several important functional structures of eukaryotic cells.

At present, the main biomolecules that have been introduced are as follows: biological composition

The above biomolecules can be combined to perform certain functions of the cells and constitute certain structures of the cells. For example, in the “Lipid” section, the first thing we see is the schematic of the cell membrane below.

In addition to the bilayer membrane structure composed of a special type of lipid, the cell membrane also contains a large amount of protein and sugar. As shown, proteins and sugars often combine to form glycoproteins; sugars can also bind to lipids to form glycolipids.

More information about the CA-125 trial.

Many kinds of proteins and biomolecules often bind together to form some functional structures within the cell. Later, we will also discuss more complexes collectively called organelles.

to sum up biological composition

All organisms, including the cells that make up the human body, are made up of several types of biomolecules. Here are the four main categories:

More biomolecules can be formed from a combination of these four molecules. For example, many proteins change due to the attachment of carbohydrates, and the final product is called glycoprotein. biological composition

How to take care of eyes daily? Daily routine and tips 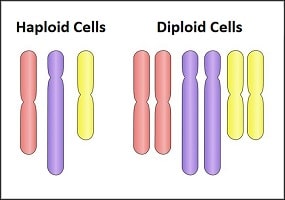 What Is The Difference Between Haploid And Diploid Cells? In Detail