We explain what pesticides are, what types of pesticides exist and why they are dangerous. In addition, organic pesticides.

Pesticides, pesticides or biocides are a type of chemical compounds intended to repel, destroy, prevent or combat any undesirable species of plants or animals.

They are used during the stages of production, storage, transport and distribution of food of agricultural origin, including the substances that are administered to the breeding animals to strip them of ectoparasites.

This term includes various substances for everyday use in the agricultural industry , other than fertilizers, nutrients, additives and animal medicines. They are used to combat the most frequent pests of food plant species, such as insects, fungi , bacteria , mollusks, small mammals , birds and even other plant species.

Without necessarily constituting poisons, these substances, however, can be harmful to both human beings and other third species , who inadvertently consume them in food or its derived products.

Pesticides of various types were used in the modern agricultural industry since early times. In the 1980s, a true explosion of pesticides occurred that allowed the increase in world agricultural production to revolutionary levels.

Relatively economical and very effective, they even came to be used as a preventive measure, without waiting for signs of some kind of contamination, which led to a catastrophic scenario.

The misuse of pesticides on the one hand caused significant ecological damage that led to the prohibition of many of them (such as DDT, found in the body of species from latitudes far away from the place of application). On the other hand, it led to the emergence of resistant pests or new distinct agricultural pests, such as certain species of mites.

There are various types of pesticides, generally designed to attack a specific type of pest, whether animal, microbial or vegetable. Based on this purpose, we can classify them into:

What Are Pesticides Used For? (Uses)

Its most common uses may be to kill rats and mosquitoes that can transmit diseases such as yellow fever and malaria . They can also kill insects that bite us or damage our animals or our property. Herbicides can also protect our fruits and vegetables. Herbicides are used to kill weeds and also to control invasive plants that can inflict damage on the environment. Herbicides are also used in lakes and ponds to control the growth of algae and aquatic plants that can interfere with swimming, fishing, or give off odors. They are used to control termites and mold that can damage buildings. In food storage places they are used to control rodents and insects that infect grains and other foods. Each pesticide carries some risks; The proper use of pesticides reduces these risks to a level considered acceptable by the agencies that regulate their use, such as the United States Environmental Protection Agency (EPA) and by the Pest Management Regulatory Agency ( PMRA) from Canada.

Pesticides can save farmers money by preventing crop losses from insects and other pests. In one study it was estimated that farmers in the United States saved the equivalent of four times the cost of pesticides. Another study showed that not using pesticides resulted in a 10% loss of the value of crops. Another study conducted in 1999 found that a pesticide ban in the United States can result in increased food costs, job losses, and increased world hunger. 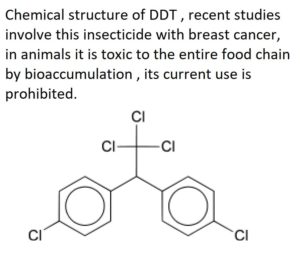 Chemical structure of DDT , recent studies involve this insecticide with breast cancer, in animals it is toxic to the entire food chain by bioaccumulation , its current use is prohibited.

The DDT , an organochlorine compound has been used spraying the walls of houses to combat malaria since the 1950s The World Health Organization has supported these measures in some of his statements. However, a study in 2007 seems to implicate DDT in breast cancer when exposed to it before puberty. Poisoning from DDT and other chlorinated compounds can also occur when they enter the food chain. Symptoms include nervous excitement, tremors, seizures, and death. Scientists estimate that DDT and other chemicals in the organophosphate category have saved 7 million lives since 1945 by preventing diseases such as malaria,bubonic plague , trypanosomiasis and typhus . However, DDT is not always effective, since insects develop resistance to it. This resistance began to be noticed in 1955 and by 1972 nineteen species of mosquitoes have become resistant to DDT. In 2000 a study in Vietnam showed that control methods that do not use DDT are more effective. The ecological effect of DDT on organisms is an example of bioaccumulation . Its use is currently prohibited by the Rotterdam Convention which involves a large number of countries.

There are few risks involved in the use of these types of products. Among them, we can list the following:

Deterioration of benign species . Due to their indiscriminate use over large areas, pesticides can cause the death of harmless or even benign species for cultivation, causing enormous ecological damage to the environment and sometimes even accidentally encouraging the emergence of new pests due to the absence of predators natural.

Permanent damage to the human organism . Traces of these products that can sometimes be found in food, in the water of rivers and lakes (or waters from contaminated underground deposits ) or even inhaled directly from the air , can cause different types of damage to people. According to the damage caused, we can talk about:

Food contamination . Given its abundant use throughout different stages of the production chain, it is possible that foods intended for human or animal consumption contain traces of varying concentrations of these toxic products.

Unlike pesticides, fertilizers are substances intended to improve or enhance the growth and production of agricultural plant species. They usually consist of additives to the soil or water that give plants extra nutrients to accelerate their growth, supply soil deficiencies or boost fruit production.

However, fertilizers are also substances, in many cases, of inorganic origin and capable of causing various damages . Its excessive use can destroy the plant you are trying to feed, causing the soil to harden too much for its roots or unbalancing its internal chemistry.

In addition, the excess of fertilizers is washed by rain or water and usually flows into rivers, lakes and seas, where it adds an unusual component to the availability of nutrients, generating abnormal growths of algae and other plant species.

This can lead to ecological crises that lead to food or tourism crises , such as what happens with the sargassum in the Yucatan Peninsula, in Mexico.

Organic pesticides or biopesticides are those that are extracted from natural sources , such as other plants, or abundant minerals. That is to say that they do not come from a laboratory. They have a much smaller impact on the ecosystem , although they do not necessarily carry lower risks to human health, so they also require scrupulous management.

However, these types of pesticides usually have a more limited effect , slower performance and less problems of residual presence, so they are often not chosen instead of traditional pesticides.

In addition, instead of eradicating pest populations, they tend to keep them under control, within minimally acceptable parameters, that cause much less damage to the species’ ecological balance.

Some of these biopesticides can be of microbial origin, and sometimes they are simply predatory species of pests, which are responsible for keeping their growth at bay, without putting other benign species at risk. 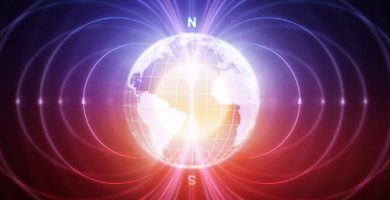 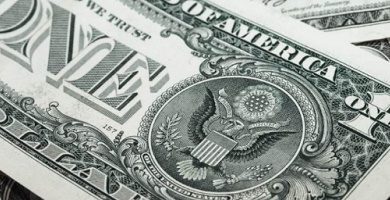