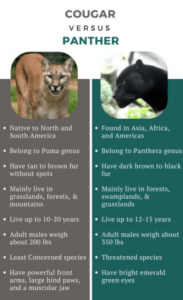 The difference between Panther and Puma is that panther is a word that refers to the animals of the genus Panthera that includes lion, tiger, jaguar, leopard, etc. while Puma refers to animals belonging to the genus Puma.

Comparison table between Panther and Puma

Panther is one of the largest cats in the world that can roar and can easily adapt to a variety of inhabitants around the world. They have their native in Asia and Africa.

The word Panther refers to the Panthera animal genus that includes many big cats such as the lion, tiger, jaguar, leopard, and many more.

Panther refers to leopards and jaguars that have all black fur due to an excess of a pigment called melanin. A panther could be any of these: a black jaguar, a black leopard, and a Florida black panther.

The panther is a powerful carnivorous animal that is black due to a mutation in its chromosomes. There are also white panthers which are known as albino panthers. Its white color is due to albinism or chinchilla mutation.

A normal adult panther is about 6 to 7.2 feet in length, about 24 to 28 inches tall at shoulder height, and weighs about 100 to 160 pounds. They do not have spots on the body or tail, but they do have a characteristic dark glossy coat.

Puma is also known as cougar, mountain lion, catamounts, and by a variety of other local names. They have their native in America. This animal can be easily found in the mountains ranging from southern Canada to the tip of South America.

The cougar is a carnivorous animal that is most active at night. It is the largest of the small cats. He loves to hunt a variety of animals such as elk, deer, cattle, horses, rodents, and many more. They have a characteristic black ring around the nose.

The scientific name of the Puma is Felis concolor which means “cat of one color”. These cats lack the missing fur markings according to the meaning of their scientific name. The word Puma refers to the genus Puma.

Puma bites the neck, head or throat while killing. Some puncture marks made by its claws can easily be seen on the sides and bottom of its prey.

A normal adult cougar has a length of about 2.4 meters, a height of between 60 and 76 cm at the shoulder, and a weight of around 53 to 72 kilograms.

Main differences between Panther and Puma

The word panther is used for animals that belong to the genus Panthera, including big cats like the tiger, lion, jaguar, and leopard. On the other hand, the word puma refers to the genus Puma.

Having different origins, both panthers and cougars are considered one of the most important and largest members of the cat family. They are one of the wildest animals in the big cat family in the world.

difference between will and going to in tabular form

Difference between thesis and dissertation in tabular form

Difference between wizard and sorcerer with table

What is the difference between joy and happiness with table