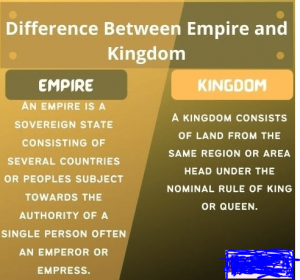 We explain the difference between king and emperor with table. Since the existence of mankind, there has been a practice or tradition of rulers. A ruler is a person who brings together the entire population and works for their improvement. A ruler can also be referred to as king, emperor, leader, monarch, shahansha, etc. Each kingdom, nation, or country has a different title for the highest power in the kingdom.

King and Emperor are the two titles that are often confused with each other and as a result they are used interchangeably but they have some differences. A king is a ruler or head of a particular area or king and an emperor is a ruler of a larger empire and possesses all the power related to the empire.

The difference between king and emperor is that a king is the ruler of only one kingdom and has the powers to rule and make decisions related to that kingdom, the power is transferred to him by inheritance, by conquest or by elections, on the other hand, a Emperor is a ruler of a much larger empire and therefore he is known as the king of kings, he has the power over various territories or a group of nations.

Comparison table between king and emperor

What is a king?

King is the title given to the male leader of the kingdom and its female equivalent is queen. A king is the ruler of a particular area which is often called a kingdom or nation.

A king comes to power by inheritance, by elections, and by conquest. The king is the highest order within a defined kingdom. The title of king is more defined for political purposes. A king rules a homogeneous territory such as a kingdom, a nation, or a country.

In the early days, people used to refer to a king as equivalent to God or a person sent by God to help them. In modern times, the title of king is used to refer to the ruler of modern monarchies.

What is an emperor?

An emperor is the sovereign ruler of an empire, his equivalent is an empress. An emperor is also entitled as King of kings as he is the highest rank. An emperor always hopes to annex more areas.

An emperor is given power by inheritance or by conquering an empire. An emperor rules a larger area, like a group of nations. An Emperor also has more powers in his hands, he makes important decisions related to the army, trade, development, etc.

In recent or modern times, Japan is the only country with an emperor.

Main differences between king and emperor

The king and emperor may differ in their ranks and powers, but both have the right to make decisions related to their respective region. Both work for the betterment of their region and its people. Both may have a council of ministers appointed to assist in making important decisions. In the modern world, it is rather to find an emperor since Japan is the only country that has an emperor, however a king is comparatively easier to find.

Difference between legislation and regulation with table

Difference between dual and cooperative federalism with table

Difference between Through and Into in tabular form