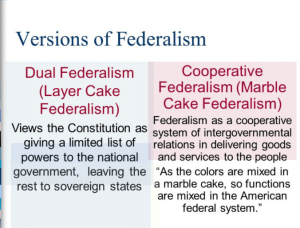 We explain the difference between dual and cooperative federalism with table. A nation is run by the policies and administration of the government in power. They are responsible for decisions, development and integrity.

Each country works with its ideology, some countries follow a monarchy like the United Kingdom, some follow a one-party system like China, where a single party dictates and regulates the entire nation, while few are multi-party like India, where the powers are likely. interchangeable.

In a country that has a multiparty system, power is not centered and is a seesaw of possibilities.

A federal nation allows the resident population to elect their representative and bring him to power regardless of the winning party in the center.

Federalism can work in two ways based on the power to make independent decisions; Dual federalism or cooperative federalism can be adopted by a constitution to divide powers.

What is dual federalism?

Popularly explained as a cake layering power distribution method, where each cake layer means a limit metaphorically. Dual federalism is the distribution of powers at both the central and state levels.

The beginning of dual federalism dates back to American history, where it was first introduced in 1781, to create separate spheres of jurisdiction. The American system is a classic example, a federal government and 50 state governments.

It is a political arrangement with terms clearly established under the respective constitution. The state government is independent in the operation and formation of policies, the central government cannot intervene in the state’s affairs.

This type of federalism benefits the population by choosing an authority based on ideology and ethnicity in majority independent of a rule. Countries like India are the ones that benefit the most from it,

All national affairs, defense policies, international trade are under the central government, while the state can form separate criminal laws, policies that benefit the region.

What is cooperative federalism?

Cooperative federalism is a mutual relationship between the state and the central government in terms of power, policies, and implementation.

Also popularly known as marble cake federalism because the dividing line between the center and the elected heads of the state is blurred, the politics are interrelated and the whole process works in the same sphere.

The term was introduced in 1901 where all the separate political bodies functioned together, between the different levels of government for the same cause, that is, nation.

It has its advantages and disadvantages, the independent power of the state dissolves and can create a dispute between central and state policies. While, on the other hand, if it is well organized, it can improve relationships and facilitate a cultural exchange.

Each country works in a specific way, based on the idea documented in a constitution. Federalism allows the nation to be governed by different political, central and state entities. Both entities are empowered to serve the population within a nation, the center makes policies for the entire nation while state policies may be subject to a just state.

Dual federalism is the distribution of powers that began in the United States, where the government elected by the state has the right to formulate policies and is not fully dependent on the central government; however, the central government is responsible for crucial matters related to national policies, international trade, and meetings.

Difference between rock and metal music with table

PhD vs DNP with definition and comparison table

Difference between public sector and organized sector in tabular form