We explain what the gaseous state is and some of its properties. In addition, the transformation of matter into a gaseous state and examples.

A gaseous state is understood as one of the four states of aggregation of matter , together with the solid, liquid and plasma states. Substances in a gaseous state  are called “gases” and are characterized by having their   constituent particles little joined together , that is, expanded along the container where they are located, to cover as much as possible the available space.

The latter is due to the fact that they  have a very slight force of attraction , which means that the gases lack a defined shape and  volume , taking those from the container that contains them, and also having a very low density , since their particles are in a state of relative disorder, moving or vibrating very quickly.

In this way, the molecules  that make up the matter in a gaseous state do not manage to hold each other firmly and stay together with difficulty, being even less affected by gravity , compared to solids and liquids: that allows them float up. Despite their almost zero cohesion, the gases have an enormous capacity to be compressed , which is often carried out during their industrial treatment for transport.

The physical properties of a given gas (color, taste, smell) may vary depending on the elements that constitute it or that are dissolved in it. For example, ordinary air is colorless and odorless and tasteless, while hydrocarbon gases such as methane have a typical unpleasant smell and may have color .

Transformation of matter to the gaseous state

It is possible to bring certain liquids or solids to the gaseous state, generally subjecting them to drastic and sustained changes in temperature and / or pressure . In the same way, but in the opposite direction, a gas can be transformed into a liquid or a solid . These processes can be studied separately, as follows:

Some everyday examples of matter in a gaseous state are: 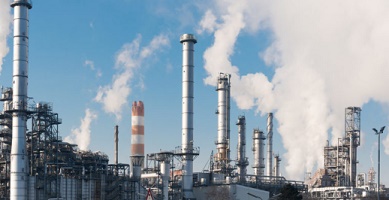