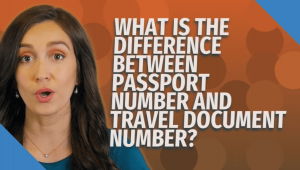 We explain that what is the difference between passport and travel document with table. In today’s busy and competitive world, traveling has almost become a necessity of the day. The globalization of the world economy has opened new frontiers leading to a massive movement of people between countries and cities. International travel has increased by leaps and bounds in recent decades.

Comparison table between passport and travel document (in table form)

What is the passport?

The passport is an official document issued by a relevant legal authority of a country to its citizens. The Passport is issued with the purpose of serving as an important document for departure and re-entry into the country. In simple words, the passport allows a citizen to travel to a foreign country in accordance with the visa requirements.

The passport is proof of citizenship. That means that Passport is a protection for the citizen while living or studying abroad. The passport allows the identification of the country to which the person belongs and this can further help to obtain assistance from the local embassy in a foreign country in case of urgent situations.

The passport will generally contain details such as the holder’s name, date of birth, address, signature, photograph, and any other information depending on the type of passport issued. The passport will have a limited validity of between 10 and 15 years after which it must be renewed. There are different types of passport like official passport, diplomatic passport, family passport and others.

What is the travel document?

Travel Documents are commonly issued to facilitate the movement of people across international borders to comply with certain treaties or for multiple other purposes. Travel Documents can also be issued for other reasons, such as passport expiration or loss of passport, or a new passport is not issued and the person has an immediate need to travel.

Travel documents can be considered a sufficient document, especially if traveling domestically or if traveling within group countries. For example, traveling to Nepal from India does not require a passport, and people can travel with valid identification documents. Furthermore, travel within certain EU countries may be based on appropriate proofs of identity provided by the traveler, in which case such identity cards serve as Travel Documents.

The travel document does not indicate proof of citizenship. Therefore, from this perspective, the travel document has fewer attached privileges. Certain countries may prohibit travel solely on the basis of a travel document and therefore this document may not be of much advantage to someone traveling or staying abroad, especially for a longer period.

Both the passport and the travel document have their importance when it comes to traveling. It is important to understand the difference between a passport and a travel document, especially in the situation of international air travel. This is to avoid any unpleasant situation of being rejected by the immigration authorities at the airport or in the receiving country.

Travelers’ best and prudent option would be to check passport validity, especially when traveling abroad to a country that has strict entry restrictions. In addition, for domestic travel or within group countries, the necessary identification, such as the PAN card, the electoral card and the social security cards, can be kept on hand to present to the relevant authorities when necessary.

Difference between split up and split off in tabular form

Difference between padding and margin in tabular form