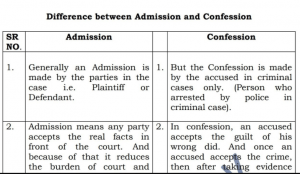 It can be done by any of the interested parties. The concept has also been defined in section 17 of the Indian Evidence Act of 1872.

Comparison table between confession and admission (in tabular form)

Admission parameter to the comparison confession

When the defendant in a case directly acknowledges his guilt, that statement is called a confession.

This is based on the premise that no one will falsely admit to being guilty of a crime. A confession can also be retracted later.

A confession must be a direct statement and not a mere inference from the words of the accused. It must be done voluntarily and without any kind of coercion.

While a conviction cannot be based solely on a confession, it can be used to corroborate other evidence.

The Indian Evidence Act, of 1872 does not define confession but sets out certain conditions that must be met for a confession to be accepted as evidence and also explains the circumstances under which a confession will be relevant.

Under article 24, the law establishes that a confession will be relevant only if it is not made under any threat or incentive from the authorities.

In accordance with this principle, article 25 establishes that if the confession is made to the police while the accused is in their custody, it will not be relevant.

However, a confession made to the police can be accepted if it is made in front of a magistrate, as the presence of the magistrate will ensure the safety of the accused.

This has been established in Section 26 of the law.

Similarly, if a confession is made while in the custody of a police officer that leads to proof of a fact, article 27 allows that confession to the extent that it relates to the proven fact to be presumed as true.

Section 28 also allows a confession made in police custody to be considered relevant if the court finds that all forces that could threaten, induce or make promises have been removed.

Even if the accused made the confession because he was promised secrecy or when he was drunk or dressed without knowing that the police could hear him speak, it will be considered relevant as established by article 29.

There are two types of confession: judicial and extrajudicial. The first refers to a confession made in court during the trial or to a magistrate according to article 164 of the 1973 Code of Criminal Procedure.

If a confession is made outside of court proceedings and not in the presence of a magistrate, it is called an out-of-court confession.

The simple fact that the accused admits his guilt out loud in front of bystanders can be taken as a confession if it can be proven by corroborating evidence.

Admission is defined in Section 17 of the Law as “a statement, oral or documentary or contained in electronic form, that suggests any inference about any fact in question or relevant fact, and that is made by any of the persons, and under the circumstances, mentioned below «.

While admission also refers to the voluntary recognition of a fact, the definition is much broader than confession.

Section 18 holds that a statement made by a party to the proceeding or its agent is an admission. Therefore, it can be done by any party and not just the accused.

This is an exception to the principle that only the parties to the complaint can make admissions.

Article 20 also provides an exception to the aforementioned principle, since it allows third-party statements to be treated as admissions if they have been expressly sent for information by one of the parties to the claim.

The law establishes that admission is relevant under article 21. Furthermore, it allows proof only against the person who makes it or against his agent.

However, the section also describes the exceptional situations in which the admission can be proven by the person making it or by his representative.

Once the admission is made, the creator is bound by what he has said. It must be voluntary and not under any form of threat of coercion.

There are two types of admission. Court admissions are made by the parties during the proceedings before the Court and are completely binding on the parties.

Extrajudicial admissions are informal and take place outside of court proceedings.

Since extrajudicial admissions are not done through a formal procedure, they cannot be fully binding. They operate only to the extent that they can be used as a legal impediment.

Furthermore, they are not part of the case records.

Main differences between confession and admission

Confession falls within the scope of admissions, but while every confession is an admission, every admission is not a confession. The degree of proof that a confession provides is greater and more definitive.

HD vs HDX with definition and comparison table

Difference Between NPN and PNP Transistor in tabular form