We explain what is a network?  and what are the types and network protocol. In addition, OSI model and the different topologies and the elements that compose it.

In computer science , network (usually  computer network  or  computer network ) means the interconnection of a certain number of computers (or networks, in turn) by means of wired or wireless devices that, by means of electrical impulses, electromagnetic waves or other means physical, allow them to send and receive information in data packets, share their resources and act as an organized set.

The networks have processes for sending and receiving messages , as well as a series of codes and standards that guarantee their understanding by the computers connected to the network (and not by any other). These communication standards are known as  protocols , and the most common of these is currently TCP / IP.

The construction of a network allows to manage an internal communication, share the execution of programs or access to the  Internet , and even the administration of peripherals such as printers, scanners, etc. These types of swarm systems currently support many of the processes of administration and information processing today, such as telecommunications networks, the Internet or the various business intranet or various organizations.

The emergence of networks  revolutionized the way of understanding computer science and opened a new field within this discipline to meet the needs for improvement, security and operability of computer communication.

What is a network protocol (port)?

A network port is a slot that holds a personal computer . This slot has the ability to insert a network cable with which the device will connect to the router signal .

The OSI model is the one who takes care of the management of the ports and establishes them in the header of the segments is the transport layer or layer 4, thus managing the sending and reassembly of each segment sent to the network using the specified port. A port is usually numbered in order to identify the application that uses it. Decide to which program you will deliver the received data. This port assignment allows a machine to simultaneously establish several connections with different machines, since all the segments received have the same address, but they are directed to different ports.

The port numbers are indicated by a 16- bit (2- byte ) processor word , so there are 65536 ports, numbered from 0 to 65535. Although we can use any of them for any protocol , there is an entity, the IANA , in charge of its assignment, which created three categories:

The networks are classified according to their dimensions in:

Networks can also be classified according to the physical method they use for the connection, as follows:

There are three models of topology or ordering of a network:

The following elements are required to install a computer network: 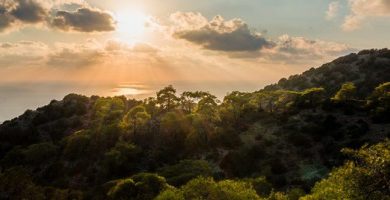